How I became PMP Certified in less than 3 months

Whenever I browsed on LinkedIn in my early career years, I always used to watch people write words such as 'PMP' &  'PRINCE2' on their LinkedIn profiles rather proudly. And i used to wonder if these sort of 'additional degrees' as i called them, are really needed to survive in the corporate world OR is this just another tactic to brand yourself. That was way back in 2011

Come to 2021, I was really leaning in to a wall. I was realizing that I needed to 'upskill' myself for  3 particular reasons:

This started me in to a YouTube rabbit-hole on what would be a good thing to learn & conquer next. I had been using LinkedIn Learning platform since 2020 for learning a lot of concepts around Agile and traditional Project Management. But getting an appropriate certification wasn't really something I gave a serious thought. I kept postponing it in 2020 justifying my postponement with silly reasons. In hindsight, I realize it was more laziness than anything else which made me postpone it for 2 years.

In Jan 2021, I made a resolution list of 3 things I needed to do professionally and personally by the end of the year. I ended up doing the other 2 on the list by mid June, and the 3rd one on the list read: 'Get PMP Certified in 2021'.

I frankly forgot about that list in the next 2 months doing the daily chores before it re-surfaced to me as a reminder in August. I usually keep these sort of larger goals organized in Google Keep & attach it to a reminder, so I don't just forget about them after making them on a particular inspiring day. Just helps me stay on track!
Back to the topic, And so I thought, why not give it a try now in the next 4 months? 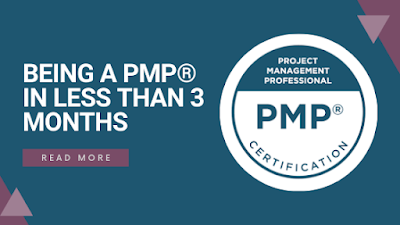 I started researching on YouTube & Reddit after work on what sort of preparation would it take to attempt for the PMP exam. Most of the comments were positive but also re-iterating to not take the preparation lightly..

You need 3 things to apply for PMP:
I joined the PMP sub-reddit and started following this YouTube Channel for my primary research. Many users on the PMP sub-reddit recommended Andrew Ramdayal's 35 hour course on Udemy as the gold standard for learning the way of the PMP exam. Before that I was trying to leverage LinkedIn Learning courses for some PMP related concepts. They were pretty boring and 'corporate' to be honest, I slept through most of them & did not find any new 'insights' from them.

And so, I decided to take the plunge with Andrew's course as Udemy was running a sale and it was available for around 350 Rupees. That helped me change my approach towards studying PMP & making me aware on how I can be thoughtful before applying for the exam. Andrew covers most of his stuff in the 35 hours pretty much emulating the exam curriculum & based on how the questions would be framed. His style of talking & teaching is really intuitive and something I was hooked from the beginning. No jargons, No bookish stuff. Straight talk & interactive. I loved it!

I (along with the others on Reddit) can completely recommend his 'Mindset' section in the course which is crucial for how you can approach the PMP questions in the real exam!

This is how my schedule then looked for studying & practicing PMP for the next 2 months:
I  did not need to follow multiple sources of information or confuse myself with methodologies to 'crack PMP exam'. I was fairly confident that knowing my own expertise & the 'mindset' would be more than enough for me to proceed for the exam.
The best thing you can do to commit yourself rather than procastinating about the PMP exam (which I have seen a lot of my colleagues do) is block the exam date. Once you see a probability as a certainity (the exam date!), you automatically start to take out time to prepare from your somewhat chaotic schedule. I did the same and blocked my date back as 26th December which would give me 2 months to prepare & give mock exams when I completed the 35 hours course.

Now that I think of it, I could have given it sooner, but with a new born baby there are always un-certainities.And so I wanted to add a buffer time in case something happened in between which I needed to take care of.
I chose a physical location even though they had recently started a virtual exam option sitting in your home. I did not trust my internet enough for that option & frankly travelling to a location would have calmed down my nerves anyway. The set-up can give you a 'board exam' vibe with a lot of competitive exams happening in the same centres around the same time. You can see students aged 18-20 studying for their GRE's & someone like me attempting a PMP at 32 years. I can imagine their stress being multiple folds compared to what I am going through. I could not help but smile & that helped me relax along with listening to some good 'Opeth' music.

The exam as predicted had a lot of situational questions which were tricky. The PMP exam does have a lot of 'word play' and if you miss out on reading one word, the wrong answer can seem like a right answer to you. So I decided to re-read each question twice, select the most appropriate answer & then verify it by reading the question again. Of-course I could not do this for every question, but reserved it for the most crucial (or tricky) ones. I ended up finishing my exam 15 minutes before time even after going through each question once again at the end.

The noise cancelling headphones which were provided were too silent for me to concentrate and took some time to get used to in the initial questions. But after the time passed, they became a crucial accesory as I tried to focus on the seemingly 'too good to be true' answers. And after much deliberation of 'if i should really end my test 15 minutes early?' question (because nobody else really had gotten up from their tests yet), I decided to end it anyway..

And a congratulations message popped up, confirming my intuition that I had indeed passed the PMP!

YESSSSSSS!!! I screamed internally but my face was as cold as it could be.

The proctor came to my seat & confirmed if I had indeed ended the test & then walked to her station for the print-out. I asked her that would the 'Congratulations' message mean I had indeed passed the test. She just said 'Hmmmmmm' which was more a half-baked affirmation than anything else. That just made my heart skip a beat as I wasn't so sure anymore if I had remembered the message correctly after having walked away from my desk.
She then gradually printed out my result & said 'Congratulations'. I was relived more than anything else. I quickly glanced through the print-out and saw the 'Above Target' scoring. A 'PMP' Certification generally means you have to be on 'Target' OR 'Above Target' as they do not reveal the number scores. But an 'Above Target' is generally considered to be a really good score, so I was happy. I came down smiling & pinged my wife about it. She was more escatic than me & soon spread the message across all my family groups. It was a big deal for her I realised.

I was relieved, more so that I had actually completed all the goals I had set out to do at the start of 2021 just 5 days before deadline. In a true PMP fashion, I had completed another one of my yearly projects just before deadline..

The first thing I did after coming home? Updated my LinkedIn Profile

A small road trip with my 2 babies